Floortime is about Connection and Shared Joy: Part 2 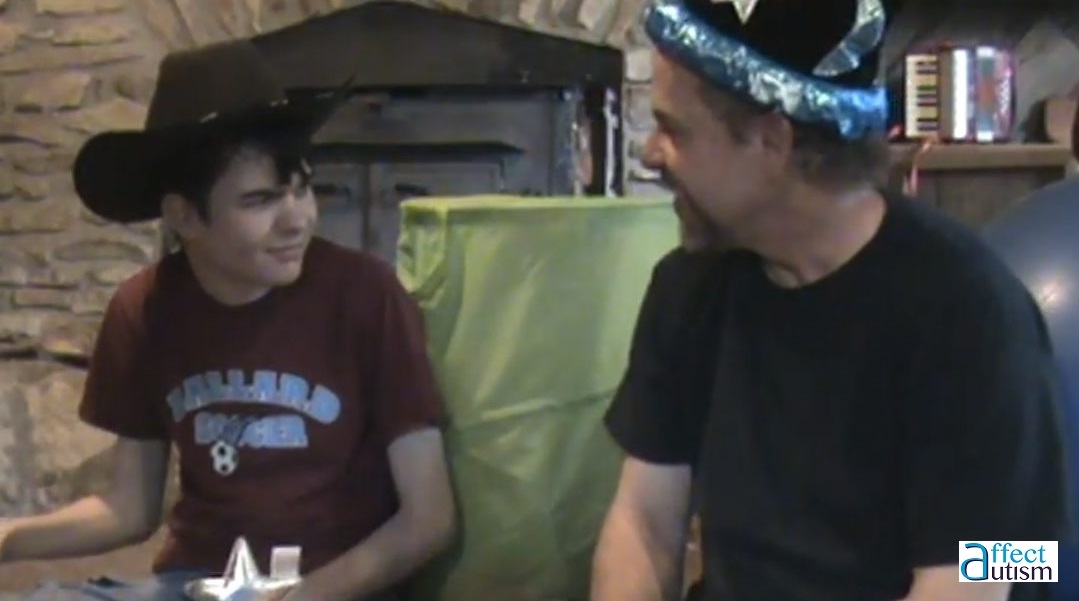 This week we have another great Floortime example with the young adult and his father whom we featured a few months ago. If you recall, Dad has been receiving parent coaching in the Developmental, Individual differences, Relationship-based (DIR) model. He continues working on engaging and interacting with his son to facilitate the early social-emotional developmental capacities. In the video below, you will see that Dad sets up some great opportunities for back-and-forth interactions with his son!

The young adult’s developmental and sensory processing profiles were detailed in the blog post from last time. Like last time, Dad is starting off by following an interest of his son’s (A.5 from the User’s Guide to the DIR Model*) in playfully using hats and a mirror.

Dad’s goal is to connect emotionally and get some good circles of communication going (3.1 Invite circles). He wanted to wait, watch, and wonder to see what his son wanted to do with the hats and not try to impose too much on him.

Become a member to view this and other Floortime videos.

* Note that Dad is not purposefully working from the User’s Guide. Dad is spontaneously meeting his son where he is at, attuning to him emotionally, and playfully facilitating engaging interactions. I am merely pointing out that Floortime brings this out naturally, and am identifying those descriptions from the book that we see in this video.

The first thing that jumped out at me was how comfortable, calm, and relaxed they look in the video. Dad’s pace is nice and slow, and that seems to match where his son is. It’s clear that throughout the video, the son is engaged with Dad and that both father and son are enjoying each other’s company. There are so many circles of communication happening in this video, so Dad’s goal was achieved in getting that ‘continuous flow’ going.

Sounds We see Dad making sounds and singing when he hears his son making sounds. This is a great way to maintain their connection by letting his son know he is joining him in singing together. The sound effects (including drumming later on) also seemed to really get his son’s attention and instantly get him to be more alert to Dad’s interaction (B.4 Calm or energize). Since the son’s profile tends to be under-reactive, this was a great way to keep him engaged throughout the video (1.2 Notice and adjust).

Attunement We see Dad really being attentive to his son from the start where he leans in to make sure he understands what his son is whispering, then repeats what he hears and checks if it’s correct (A.1 Follow cues, A.2 Be responsive). He continues to check in with his son by looking at him to see where he’s at and to guess what he might want, and by making suggestions and clarifying what his son says.

Role Playing Dad takes on the voice of a character (5.2 Animate) to introduce symbolic play and imagination (A.7 Pretend play, 5.1 Use pretend) and is enacting a story they both know.

Prompting Dad makes a suggestion to get things going when he asks if his son wants to be the character (A.9 Enrich ideas). His son immediately looks up and says an anticipatory “Yes” which really gets a nice interaction going between them when Dad ‘turns him into’ the character with his magic wand.

Affect (2.5 Emphasize affect) Dad is being his genuine self (4.7 Genuine self) using natural affect with his son, such as when he puts the different hats on him and then laughs with his son, sharing pleasure (2.3 Share pleasure).

Play Dad is being so playful (A.4 Use play) with his son as they go through the different hats, playing roles and sharing joy together.

Waiting (3.3 Wait) Dad passes the wand to his son and waits for a response to see what his son will come up with. As in many Floortime sessions, there are certainly moments where Dad could wait longer and slow it down to stretch out the interactions even more (4.1 Stretch interactions), but there are still a lot of examples where Dad waits very effectively.

Responding (A.2 Be responsive) Dad responds to his son’s initiations, such as when his son says “Wolf go away” and Dad throws the wolf away! This lets his son know that he is respecting his wishes. Dad also joins his son in rocking back and forth when they are making pig sounds.

Interact Throughout the video we see father and son interact with each other (2.6 Interact) both verbally and non-verbally and this is always our goal in promoting the early social-emotional developmental capacities.

The Fruits of Floortime
Where to go from here

Now that Dad has been able to get some good back-and-forth communication going with his son, it’s time to start thinking about some ways to move into working on the fourth capacity and create problems that the two of them have to solve together. Dad could facilitate this by gently using some playful obstruction, such as adding in little obstacles. One example might be to pause with the wand and just wait, not saying anything. Dad could also give the first part of something they are doing, and then wait, saying “Hmm…” to see if his son can start to initiate what to do next.

Another way Dad can begin to facilitate more complex communication can be hinted at by reflecting on this video (A.10 Self-reflect) and seeing what he could do differently next time. For example, when he asked his son, “What does a cowboy say?” and his son responded “Mooo…” he could take off his cowboy hat and say, pointing, with lots of affect, “Really? Wait a minute… Is this a cow?” (3.8 Consider questions) This is not about pointing out that he is wrong and that a cowboy doesn’t say “Moo“. It’s about continuing a conversation and keeping the back-and-forth going (3.5 Playfully persist, 4.1 Stretch interactions).

It’s not even important whether or not his son knows what a cowboy says. It’s just about promoting thinking. Dad could even suggest, “Does he say “Moooooo” or “Giddy up”?” (3.6 Easy choices). It just gives them an opportunity to lengthen attention to get thirty or more circles of communication (1.4 Lengthen attention) rather than asking, “What does the ___ say?” then getting an answer, which is  stop/start communication. The goal is to get a continuous flow of communication.

There are moments where Dad begins to feel pressure to keep the flow going and begins to rush a bit by asking his son, “What should we do next?” then suggesting some ideas without really waiting to give his son the opportunity to respond or initiate a new idea. By continuing to remind himself that it is ok to ‘just be‘ with his son and not have to do anything, Dad can give his son more opportunities to initiate ideas while he remains so engaged with him.
Dad could also introduce other hats like a doctor’s hat, police hat, or a fireman’s hat. Just trying to get more of what’s in this video in other contexts would be a great goal for Dad and son to focus on in their Floortime sessions. Also, if Dad notices his son’s attention fading away from their shared attention, he could use a drum beat rhythm to regulate and engage his son, since his son seemed to respond to the sound effects Dad was making.
Another way Dad could invite more circles of communication is to really use anticipation with his son. Building up suspense and waiting with the activity can really entice his son to stay engaged, respond, initiate, and problem-solve. It will be interesting to watch this team of father and son continue along on their Floortime journey. We will visit back with them again next month.

Thank you to this family for sharing their experience and growth process with others. If you have any constructive or positive feedback or questions, please comment below and/or share on Facebook or Twitter. Floortime is a process and a journey and it’s great to share our experiences with one another as we support our children’s individual and unique developmental process.

Theory of Mind is Developmental